During the monthly technical days, there was a SMART-DEMO workshop in Russia. The main focus of the meeting was to demonstrate the capabilities of the newly upgraded units Graco Mark Max™ and DutyMax™ used with JOTUN materials.

The new Graco MARK VII™ MAX Platinum became a “celebrity” during the workshop. It should be mentioned that the visitors got acquainted with an exclusive model – it was one of 135 units decorated with a spray painting of the American flag by artist Lenny Schwarz. Engineers of the SMARTEC Technical Center discussed with visitors all the newly upgraded features of the equipment which considerably improve operation. Thus, the operators who work at height appreciated the E-Control™ function – a remote control panel, which allows the control of pressure from any location.

During the first cleaning of the brand-new unit, everyone was pleased with the automatic system FastFlush™, which enhances the cleaning function and minimizes the need for additional filter cleaning.

People who carried out traditional coatings by themselves to test the equipment praised the QueekReel™ function – an integrated reel that holds 30m of standard hose, which makes it possible to carry the heavy coating hose and not to waste time and effort on its coiling. For those who never tried such equipment, SMARTEC engineers provided a brief step-by-step training and focused their attention on specifics in setting-up the unit as well as general approaches to coating.

During the demonstration, high-quality antirust coating materials produced by JOTUN were used:

MARK VII MAX PLATINUM performed with excellence with lighter materials, with two-component materials with high solid residue (82 per cent), and even with 100 per cent solid residue material. The unit demonstrated its efficiency by supporting pressure at the needed level (as well as when the nozzles were replaced with the larger ones), and also reduced material consumption and increased speed of work.

SMARTEC engineers also demonstrated the new Graco DUTYMAX 200 and its main upgrades such as the changeout of the Endurance pump at the front of the machine. Such a location provides direct suction which prevents loss of material in the supply hose and loss of suction pressure, especially important when using viscous materials. Visitors also experienced the advantages of the ProConnect™ system when they replaced the Endurance pump themselves without any tools right on the job.

That SMART-DEMO workshop again showed the high quality of Graco units and the importance of face-to-face dialogue between end-users, material and equipment experts.

SMARTEC expresses its gratitude to JOTUN and their official dealer POKROF for the materials and assistance during the workshop. We cordially invite manufacturers and suppliers of materials to contact us in view of holding joint workshops. 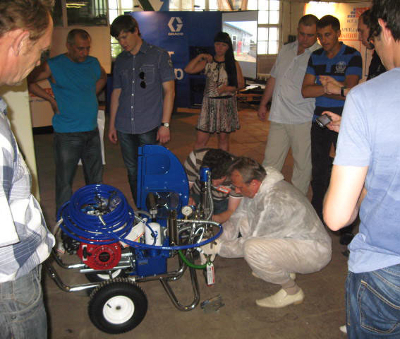