Fleet Line Markers Ltd. is a company based in Worcestershire, England. They manufacture paints and machinery for marking lines, primarily on sports surfaces, such as natural grass, synthetic and hard/asphalt surfaces.

“Generally, we are manufacturers and innovators!  We supply our range of machinery and paints to all levels involved with sport. Our customer base includes Manchester City FC, Manchester United FC, Bolton Wanderers, FC Barcelona and Real Madrid to name but a few. As well as professional clubs, we deal with local authorities, private contractors, schools, universities, colleges, rugby clubs, etc.” explains Fleet’s European Sales Manager.

Fleet invested in the Graco G-Max 7900HD as part of the development of their “zoning” paint called Hard Surface Coating (HSC). “This product meets the anti-slip requirements of the LTA, ITF and SAPCA. Due to the nature of the paint and its components, we needed an application method that was effective, reliable and relatively easy to use and maintain.”

A good customer of Fleet, a private school near Southampton, was interested in the “zoning” paint for their four netball courts and three practice “D”s. They had the HSC paint on trial on another court for close to two years. The trial court was still looking good, so Fleet revisited the product, improving it to meet the requirements and invested in a Graco machine so they could check that the new, improved version would perform when being applied with an Airless Sprayer.

The work was carried out in August, on possibly the hottest day of 2012. Ideal! It was so hot that the paint started to “skin” in the container under the machine. As Fleet was worried about the “skinning” finding its way to the suction pump, they made a lid for the paint container to overcome this potential problem. Two coats were applied at 90 degrees of each other. Once the “zoning” was completed and dry, the red tennis lines and the white netball lines were marked using the BeamRider Laser System to apply PMF paint.

The G-Max 7900HD was recommended by Graco after Fleet had sent a sample of HSC to them to check which machine would handle it most efficiently. Fleet decided to purchase a machine for their own use and also rent it to their customers who wish to spray their HSC paints. 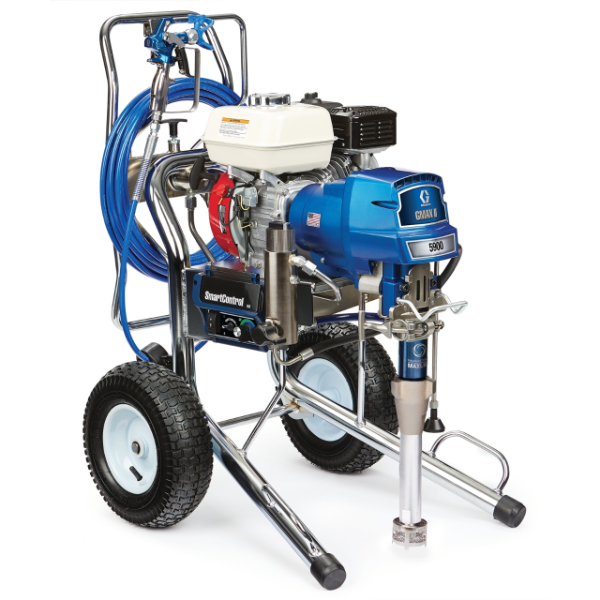 Belgian company Isofloor has been using Graco Reactors since 2007 to spray polyurethane insulation foam on all types of floors.