The great Man-made River is a spectacular project commenced in Libya in September 1984. This is the ‘river of pipelines’, sometimes called "The 8th Wonder of the World".

This Great Man-made River aims at the mass transfer of waters from the Kufra and Sareer basins beneath the earth’s surface to the coastal concentration of population in Benghazi, Sirte and Tripoli. Upon completion, the huge network of pipelines will extend to about 3,380 km.

Two special pipe factories were constructed in the regions of Brega and Sareer, to provide the project with the great numbers of concrete pipes necessary. These vary in weight between 73 and 78 tons, have a diameter of 4 meters and are 7.25 meters long.

From the very beginning, this project included lot of paint spray equipment to protect the pipes, as well as the storage tanks for the water pump installations.

In some of these storage tanks, the internal coating showed weaknesses, and in several places, even became loose from the substrate. In order to go ahead with the project, it was necessary to apply new coating material to the inside of the tanks.

In collaboration with M.A.N. Ferrostaal and the paint manufacturer AMERON, our distributor WILTEC BV in the Netherlands selected the Xtreme™ Mix 360 to apply the solvent free epoxy material "AMERCOAT 391 PC". After several tests, the conclusion was that the Xtreme™ Mix 360 was the right equipment to handle this material properly.

A total of 5 complete heated Xtreme™ Mix units were ordered and delivered to Lybia. The job is now completed, and the storage tanks are filled with fresh water. 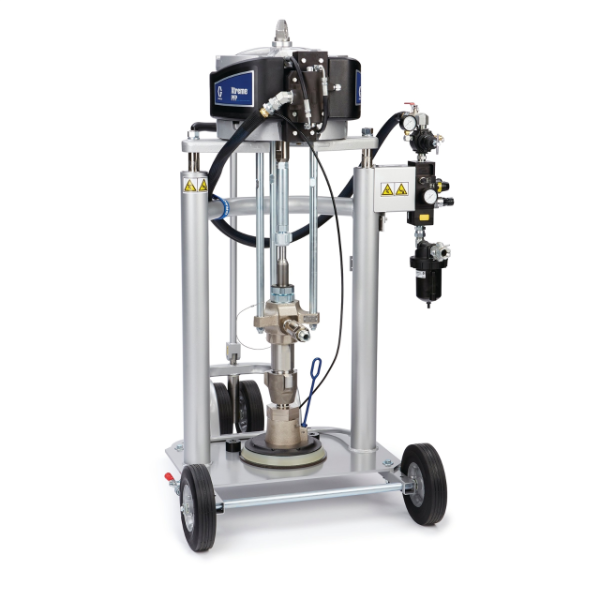 Creating a pitted finish on granite with the EcoQuip

The existing kerb in Denman Street, London, UK, was causing damage to a range of high-class vehicles including Bentleys, Rolls-Royces and Jaguars that frequently pulled-up there to drop-off hotel customers. The kerb needed to be modified to prevent additional damage and a cycle path added.