As Peter Petkas walked the floor of the SSPC Show in Las Vegas, he couldn’t help but notice that wherever he saw wet abrasive blasting equipment on display, a 5-gallon pail of his product, HoldTight, would be right beside it.

A founder of a leading vapor abrasive equipment manufacturer approached and asked: “Peter, do you realize that if it were not for HoldTight, we would not be in business?”

“Yes, I know that,” Peter replied, “because we went through it all thirty years ago.”

Back in the day, Peter was a pioneer in the wet abrasive blasting industry. They got their start manufacturing equipment that injected water into the blast stream at the nozzle, which had numerous advantages over dry blasting – not only did it accelerate the abrasive and suppress dust, but it washed debris from the surface, resulting in better coating adhesion: the less contaminants between paint and steel, the better.

The drawback was that soon after wet blasting, rust would appear on the steel. “Unlike dry blasting, with wet abrasive blasting there’s no dust to hide the rust – it’s raw.”

Corrosion is a chemical process that requires an electrical current, and pure water is a poor conductor of electricity. However, dissolving salt in water increases the conductivity of the electrolyte – creating a soup of ions that can transport electrons from one pole to another, completing a circuit.

How Rust Forms Inside a Corrosion Cell

At the anode (4), iron molecules give up electrons, which flow through the steel to the cathode (6), where they cause a reaction between water and oxygen that creates negatively-charged hydroxy ions (3).

These ions flow through the electrolyte (2) to the anode (4), where they react with newly-liberated and positively-charged iron ions to produce iron oxide, aka rust.

Besides being complicit in increasing conductivity, salt on a bare surface will pull moisture from the air to create a highly conductive electrolyte. This contributes to rapid-forming, non-uniform regions of heavy rust that will interfere with paint adhesion, contributing to early coatings failure.

In order to prevent flash rust after wet blasting, they would have to remove the salts that formed electrolytes. Most people learn in the kitchen that it doesn’t take special chemicals to dissolve salts: water does just fine. So why wasn’t the water from the wet blasting process washing away the salts?

The problem was that even though a steel surface appears flat and uniform to the naked eye, when viewed at high magnification it becomes a rugged landscape of craters and crevices, pockmarked by pores, peaks and valleys – innumerable places where fragments of salt lattices could get lodged – spaces too tight for even water to enter.

Water molecules have an affinity for other water molecules, much greater than their attraction to molecules in the atmosphere, which is why a drop of falling water will coalesce into a sphere – the shape that presents the minimum possible surface area. This inner attraction creates tension on the surface of a volume of water. 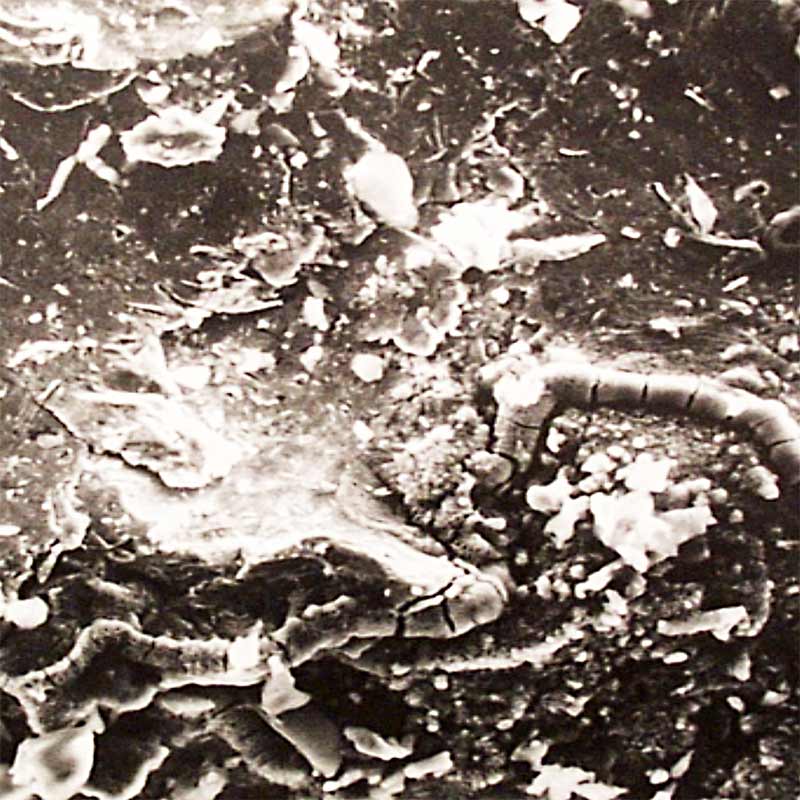 At the microscopic scale, as water washes over a rugged surface, this tension holds the surface to its minimum possible surface area – a curved plane – preventing it from flowing into very narrow spaces and dissolving the salts trapped there.

It was clear to Peter that the key to removing ionic contaminants from steel was to reduce the surface tension of water.

HoldTight is a volatile amine-based surfactant. While one end of the amine molecule is attracted to water, its long hydrocarbon tail is repelled by water and floats on the surface , while the other end sinks below the surface, disrupting the tension. 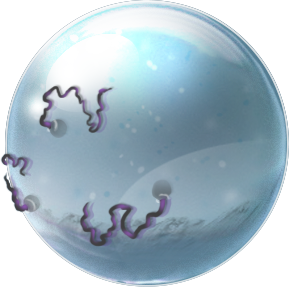 How Effective Is HoldTight? It Prevents Flash Rust On Steel For 2-4 Days.

HoldTight prevents flash rust because it targets all surface contaminants, not any specific contaminant.

“Any salt on the surface under a coating can cause blistering, or cause rust to form underneath the coating. All coatings are permeable membranes to some extent. When water permeates to the surface, it can dissolve the salt, forming the blister.”

Some salt removers form acid solutions that eat away at certain salts very effectively. But when these solutions evaporate, they can leave a different kind of contaminant on the surface that increases the conductivity of the electrolyte and leads to flash rust. “Is this bad? The Navy says yes. The ISO standard calls for the removal of total salts.” Not only does HoldTight remove all types of contamination, but when it evaporates it leaves behind no residue. 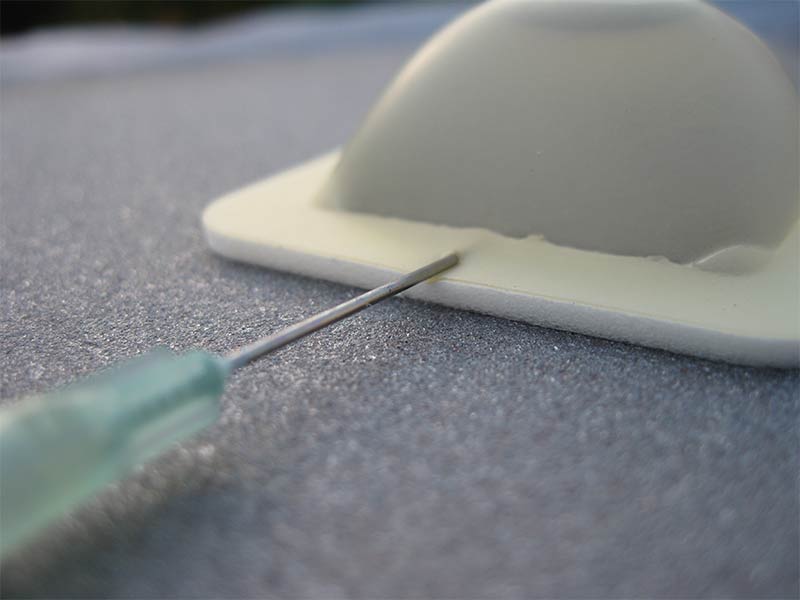 The most reliable way to detect for total ionic contamination is the Bresle conductivity test.

If the solution conducts electricity, then ions are present and rust will occur on the surface.

HoldTight extends the life of a coating. When owners specify that blasted surfaces be decontaminated with HoldTight, they end up having to blast and repaint less. By extending the life of the coating, maintenance costs are minimized, especially in high-humidity environments.

“In Galveston, apartment owners right on the beach have decorative wrought-iron features they have to paint every year because of the salt that accumulates from the air. But if they wash with HoldTight before they paint, they’ll get another two to three years, even in a harsh beach environment.”

For large infrastructure projects where the cost of maintenance runs in the millions, using HoldTight is a no-brainer.

“When the Laviolette bridge over the St Lawrence river was dry blasted, Sherwin Williams required the contractor to pressure wash with HoldTight before applying the coating, because they weren’t satisfied that dry blasting alone would provide a sufficiently clean surface. 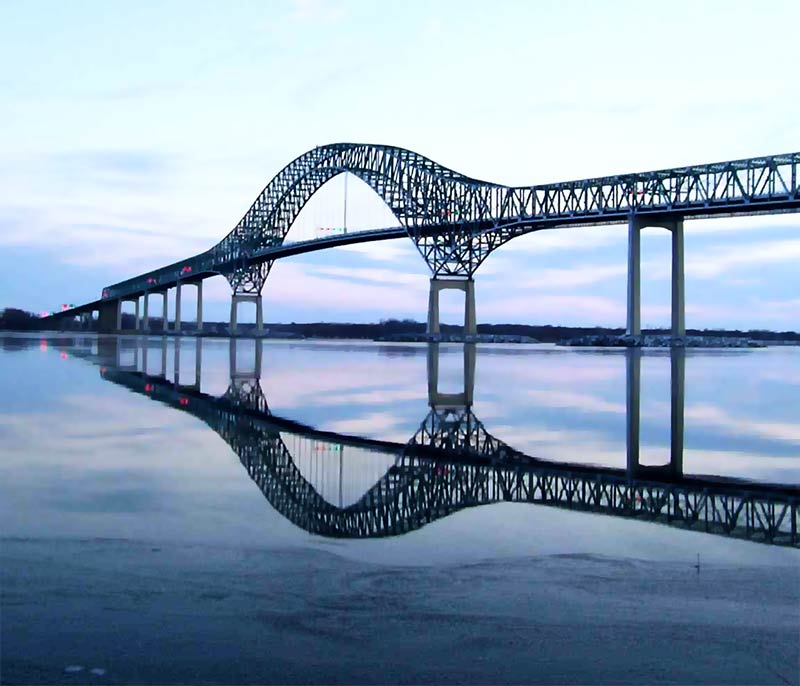 “Increasingly dry blasting is not acceptable for a host of reasons – safety, environmental impact, effect on neighbors. But If I owned some infrastructure and I could get away with dry blasting, I would wash it down with HoldTight, because I know what’s on the surface. Why would you knowingly paint over the dust left over from the blast? All that stuff is just sitting there, sucking moisture out of the air.”

“If you’re dry blasting, it’s a good practice to wash oil and grease off first with soap and water.” Failure to do so will smear the grease around the blasted surface. “If you’re wet abrasive blasting, you’re already doing a lot of cleaning, but if you add HoldTight you are also degreasing. It has the same effect on grease as soap. With HoldTight in wet abrasive blasting or water-jetting equipment, there’s no need to pre-wash – it’s a waste of time and money.”

By 1989, Peter and his partners had decided that manufacturing blast equipment required more capital than they were willing to invest, so they decided to shutter the equipment business to concentrate on manufacturing HoldTight.

HoldTight had proven a winner from the start. “In the beginning, we went to all the major coating manufacturers, set up test programs with their coatings on surfaces prepared with HoldTight, and virtually all of them approved it with most of their products.”

Peter has a chart showing HoldTight’s revenue growth from 1989 forward. It depicts slow but steady growth up until 2011, at which point it curves upward like a hockey stick. “This is the rebirth and expansion of wet abrasive blasting,” Peter says, referring to next-generation equipment that blast moist media, rather than slurry blasting technology that wets the media at the nozzle or beyond – a segment that is being disrupted by vapor abrasive blasting equipment.

The world standard – ninety percent of all the blasting that’s done from India to Timbuktu to New York – ignores the problem of ionic contamination. They’ve come to accept a reduced lifespan of the coating, which we could extend by removing contaminants.” Meanwhile, HoldTight’s international sales are ramping up. “The smart guys who have knowledge of this mechanism are beginning to write specifications that say ‘not only do we want no flash rust, we don’t want any contaminants.’” 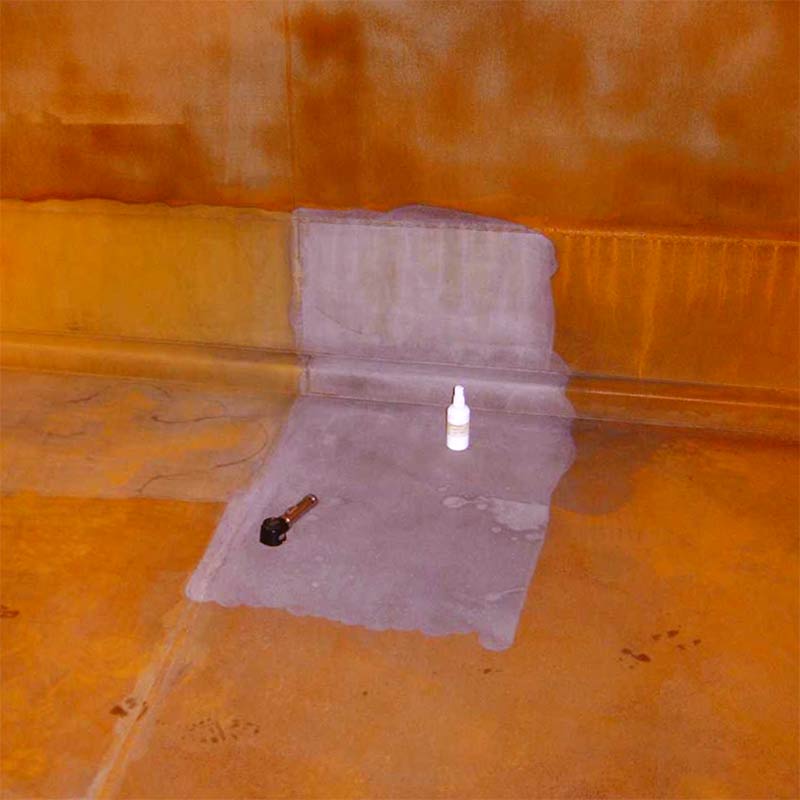 This section of steel was washed down with HoldTight after blasting. Forty-eight hours later, still no sign of flash rust.

“HoldTight is such a simple idea that it’s been overlooked for many years,” Peter says, but HoldTight does face competition from other amine-based surfactants in the abrasive blasting market. So why is HoldTight the market leader?

For wet abrasive blasting, Peter recommends mixing water to HoldTight at a 100:1 ratio for both blast cycle and wash down. “In a highly corrosive environment, you way want to increase to 75:1 or 50:1, as insurance.”

After dry blasting, pressure wash with water and HoldTight at a 50:1 ratio. 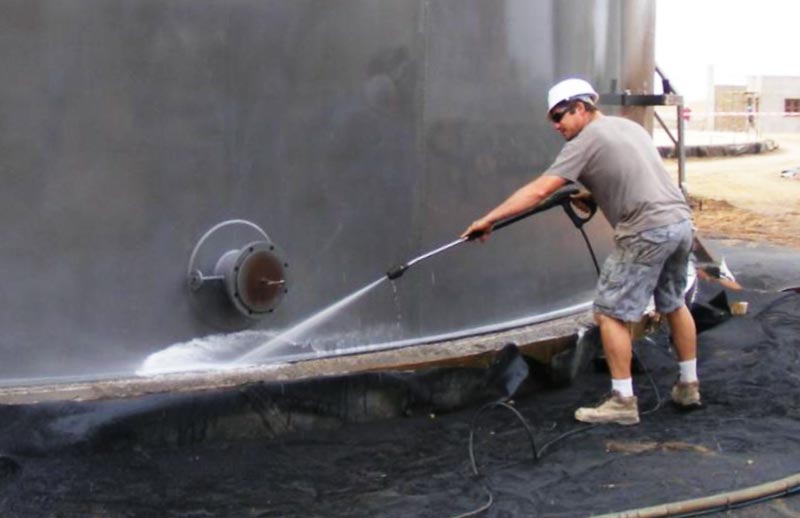 Remove all salts, acids and contaminants to prevent flash rust for up to 72 hours. HoldTight distributes worldwide through local dealers near you.

Everything you need to know about blasting PPE for dry, wet, and vapor abrasive blasting.