The problem with concrete is that you never know what it will do when you hit it with an abrasive blast.

Fines and cement paste break away easily enough, exposing the harder aggregate. Unlike steel, the compressive strength of concrete is not uniform, so blasting will not impart a consistent surface profile or anchor pattern. A blasted concrete surface is a cratered landscape of cavernous pores and capillaries.

For proper bonding to occur, repair mortars, concrete overlays and coatings must penetrate and fuse into the substrate’s capillary network. When the network is blocked, blasting opens it up, exposing the aggregate and roughening the landscape.

But with no peaks and valleys to press tape to and measure by depth micrometer, how does the blaster know when he’s achieved the specified surface profile? How is it even possible to specify a profile for concrete?

There are other problems. Not only must a properly prepared concrete surface be adequately roughened, it must also be sound and contaminant-free. But due the relatively porous nature of concrete, contaminants often penetrate deep into the surface, weakening the substrate to a depth beyond the effective reach of abrasive blasting. For other applications, like decorative finishes, only the superficial, friable layer of hardened cement paste should be removed. What do you do when abrasive blasting is overkill or under-kill?

This guide to concrete surface preparation walks you through the solutions to these problems and more. But first, let’s understand how and why concrete can fail, and how it can be made sound again.

When a coating, overlay or repair mortar is applied to unsound concrete, the bond between the two materials may hold but when pressured, unsound concrete will simply detach from the slab. Cracks, microcracks, blisters, scaling, spalling, or de-lamination are symptoms of unsound concrete that must be removed, then patched, before surface preparation can proceed. 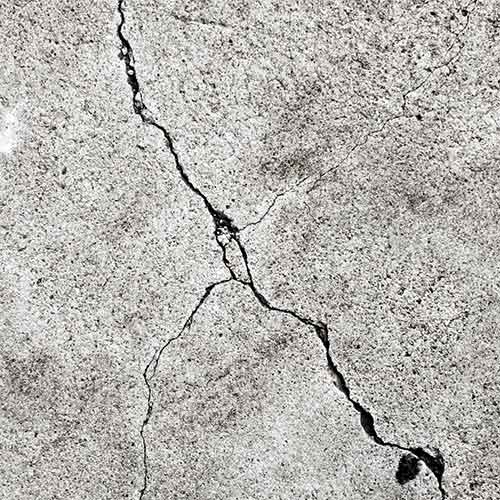 Visible cracks are the most obvious symptom of unsound concrete and have various causes. Superficial cracks are caused by rapid surface water loss during the curing process. Settling of the subgrade can crack the slab in two. Heavy loads or impacts can cause visible cracks immediately, or cause microcracks which later propagate into visible cracks. 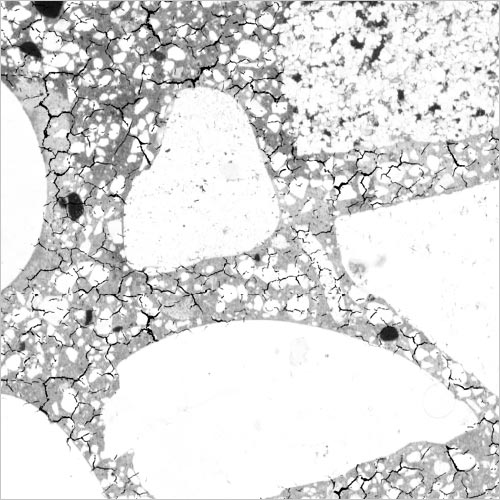 Microcracks are invisible to the naked eye, measured on the scale of microns. Microcracks are caused by overloading, impacts from dropped loads and impact tools like jackhammers and scabblers, freezing and thawing, and temperature differentials that occur during cement hydration. Bruising occurs when microcracks form a network near the surface. The unsound concrete then crumbles away, exposing aggregate. 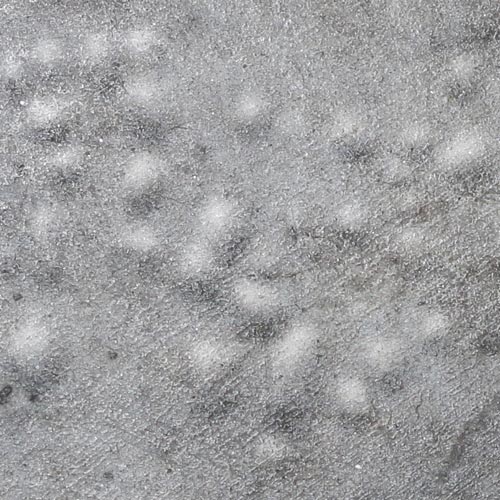 Blisters form when air bubbles are trapped under the surface, unable to escape due to a premature drying of the surface due to wind, an overly-sticky mixture that seals the surface too quickly, or premature finish applied to the concrete, by trowel, for instance. 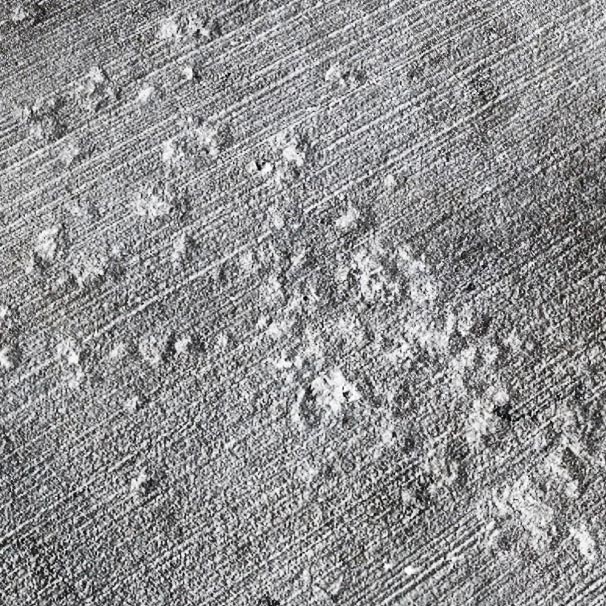 Scaling is caused when water freezes in the pores and capillaries in concrete. When the hydraulic pressure of the expanding ice exceeds the tensile strength of the concrete, scales of mortar detach from the surface, exposing aggregate. 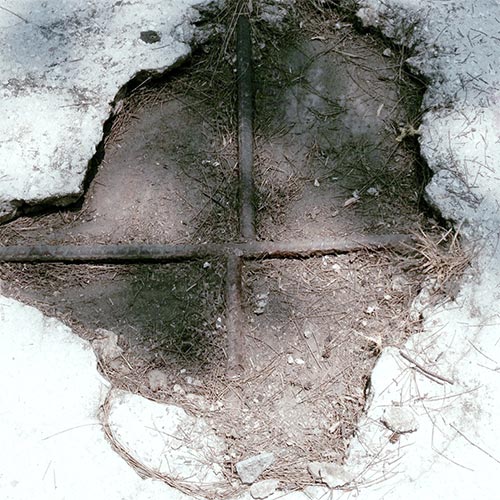 Spalling is similar to scaling, except the expansion occurs from deeper within the concrete, causing the surface to disintegrate into larger fragments. Common causes are steel reinforcing corrosion due to carbonation, intense heat that causes water vapour to expand violently, improperly constructed joints and crack deterioration. 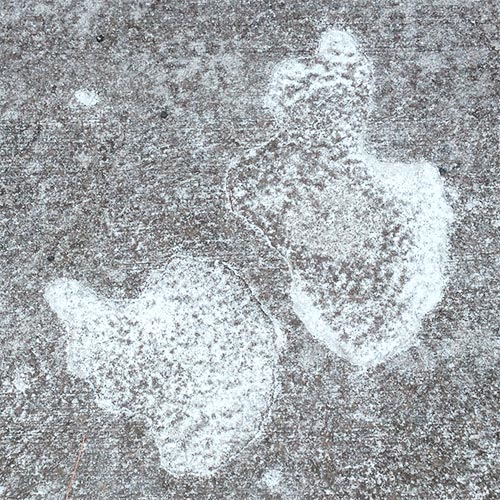 A delamination is a hollow, horizontal plane below the surface that forms when a finish is applied before water and air can bleed out of the concrete. When crushed by traffic or a heavy load, the delaminated section detaches from the slab, exposing aggregate.

Carbonation occurs when carbon dioxide penetrates the surface through pores and microcracks and reacts with moisture and calcium hydroxide in the cement, forming calcium carbonate. This initially hardens the concrete, but it also reduces pH from 13 to 8. This reduction in alkalinity leaves embedded steel reinforcement vulnerable to corrosion.

Rust is a hydrated iron and is more massive than the steel it replaces. The increasing rust mass creates tensile stress, causing concrete to crack and spall.

Concrete won’t burn, but high heat causes the concrete to lose the majority of its compressive strength, flexural strength and elasticity. Expanding water vapour trying to escape can cause spalling.

Placing concrete under a heavy load, especially by impact, causes microcracking and cracking. Impact tools can cause extensive microcracking.

Too much water in the mix leaches cement to the surface. The surface will dry before setting occurs, causing shrinkage, cracks, reduced compressive strength and laitance.

How to Detect Unsound Concrete

Visually inspecting the surface will reveal the worst of the damage: the cracks, spalling, scaling and crushed delaminations, but the full extent of the unsound concrete is not always apparent.

Perhaps the easiest thing to do is to tap around visibly weak areas with a hammer. If the head of the hammer bounces, the concrete’s compressive strength is good. If the hammer indents and pulverises the surface, the concrete is unsound and should come out.

Cases where pockets of air, water or unwetted material have formed under the surface are not so easy to detect: the surface may be sound enough to pass the hammer or screwdriver test, but structurally compromised. Listening to the sound made when tapping the concrete reveals areas of differential density. On large surfaces, these hollows can be detected by dragging a chain over the surface, or by using equipment that flogs the surface with an array of chains.

Once the extents of unsound concrete have been outlined, removal can begin.

When the majority of the concrete surface has been compromised, it is best to remove the effected layer by mechanical means, discussed below. When spot-removal of compromised sections is called for, a common method is to chip away the unsound concrete with hammer, jackhammer, concrete breaker or other impact tool.

The best practice is to start at the centre of the weakened area and proceed to the edge.However, feathered edges are to be avoided, even if you are patching the void with a self-levelling compound or epoxy that can be spread thin: at some point, the coating application will be too thin to adequately cover the profiled surface. Chipping deep, acute edges provides better tensile bond strength, but a perpendicular or undercut edge is best.

When filling a void with concrete or other thick compound, the best practice is to saw cut edges at right angles around the compromised area. While chipping outwards towards the edge, the surface material inside the cut will break away, leaving a perpendicular edge.

Once the unsound concrete has been removed, the voids can by filled with concrete, mortar, grout, plaster, putty, epoxy or another patching compound. In addition, concrete has naturally-occurring voids that should be filled to shore up structural integrity.

The role of abrasive blasting in concrete removal

During the concrete removal stage, there are two opportunities for abrasive blasters to ply their trade.

Impact tools used to remove unsound concrete cause extensive microcracking. Patching a surface weakened by microcracking defeats the purpose of the repair. Abrasive blasting is the preferred method to remove the microcracked surfaces. 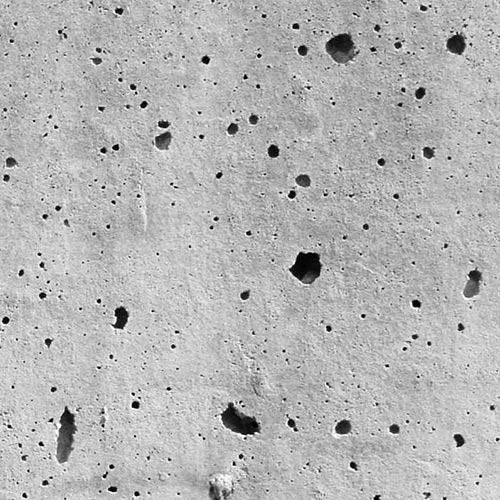 Bugholes are voids that form next to a formed surface caused by bubbles of air and water that migrate to the forms to escape the heat produced by cement hydration. 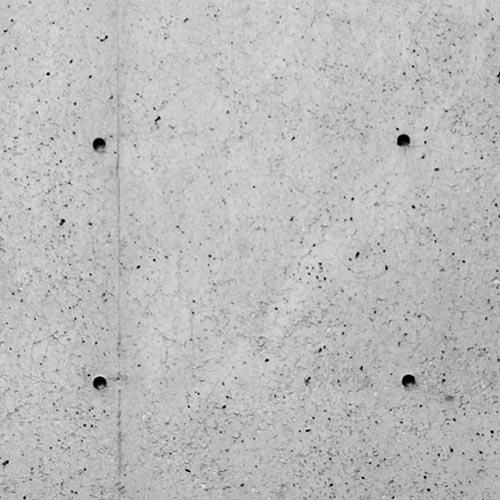 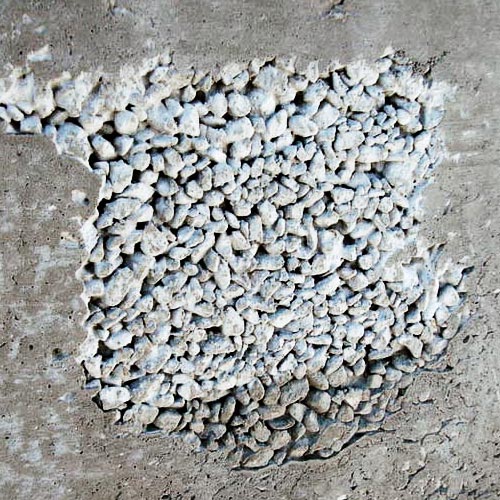 A honeycomb is a cluster of coarse aggregates where mortar did not penetrate. The aggregates are tightly packed but unbound, with poor compressive strength and negligible tensile strength. The aggregates need to be removed with power tools down to bare concrete, then filled.

Voids are not the only surface defect that require fixing. Projections that extend past the dry film thickness of a coating can cause the coating to fail, especially around sharp edges. When the overlay is a self-levelling compound, it may require an excessive amount of material to adequately cover projections. Mortar splatter, fins, ridges and other protrusions exceeding 1.6 mm (1/16th inch) should be ground down or chipped away.

Before patching with a cementitious product, the substrate should be in a saturated surface dry (SSD) condition. This entails spraying it with a hose then wiping it off, so that the pores are saturated but no free water remains on the surface.

If the surface is wet, the water-to-cement ratio will rise along the bond interface, causing shrinkage, microcracks and weakening the bond. When the surface is unsaturated, it will pull water from the repair material, potentially resulting in insufficient cement hydration and reduced strength along the bond.

Having restored the sound concrete surface, the next step is to remove contaminants from the concrete. In Part Two of our series on Concrete Surface Preparation, we'll look at the different forms of concrete surface contaminants, their causes and how they can be removed (hint: abrasive blasting isn’t always the answer).

The Role Of Abrasive Blasting In Concrete Patching

Depending on the required roughness of the application, patched areas may need surface profiling by abrasive blasting.

Everything you need to know about blasting PPE for dry, wet and vapour abrasive blasting.