Curb Masters, a speciality concrete contractor, was recently tasked with improving the aesthetics of the pedestrianised Nicollet Mall area in down-town Minneapolis. Nicollet Mall spans 12 blocks in the heart of down-town and is a popular shopping and dining district. The area is currently undergoing a complete redesign as part of a $50 million project known as ‘Minneapolis Big Build.’

Curb Masters is using Graco’s EcoQuip Vapour Abrasive Blaster to create a variety of intricate stencil designs onto the pedestrian footpaths of the Nicollet Mall area. Although the City of Minneapolis did not specify equipment for this project, Curb Masters felt it would be important to find a product that would minimise dust emissions for the many pedestrians that work and live in, as well as visit, the popular down-town area.

The company soon discovered Graco’s EcoQuip vapour abrasive blasting equipment, which suppresses dust by up to 92 per cent less than dry blasting.  As the on-going work continues, pedestrians visiting and working in the area have been able to watch the process throughout, with thanks to very little containment.

Curb Masters was provided with large stencils featuring intricate designs. These stencils were produced via CAD software from the design agency in New York managing the project with the City of Minneapolis. They placed each of the stencils – which resembled a large jigsaw puzzle – onto the footpath and began lightly blasting with glass bead media until the design became ingrained onto the footpath.

Because glass bead is a softer media compared to garnet and other options, it worked well for creating a design while preserving the integrity of the surface. In addition, glass bead media is typically made from recycled material and is safe for the environment.

The unique stencil pattern was designed by a New York landscape artist urban designer who strategically planned the entire 12-block sequence. In total, three types of stencil were used across a 13,935 square metre (150,000 square-foot) stretch of footpath.

Starting with the outer most blocks on both sides of the 12-block stretch, a leaf pattern was used in that area they call the ‘Woods’ zone because of the many large trees. The next three blocks inwards on both sides, called the ‘Groves’ area, had a branch stencil to represent the transition from trees to a more urban setting. Finally, a beautiful basket weave stencil was chosen for the ‘Centre Core’ down-town area to compliment the decorative artwork that can be seen there.

The footpaths look great and the City of Minneapolis is pleased with the results. A big benefit of using the EcoQuip skid unit is the greatly reduced dust when compared to dry blasting. This is not only far less disruptive to nearby foot traffic, but also requires minimal containment and significantly less clean-up for Curb Masters. 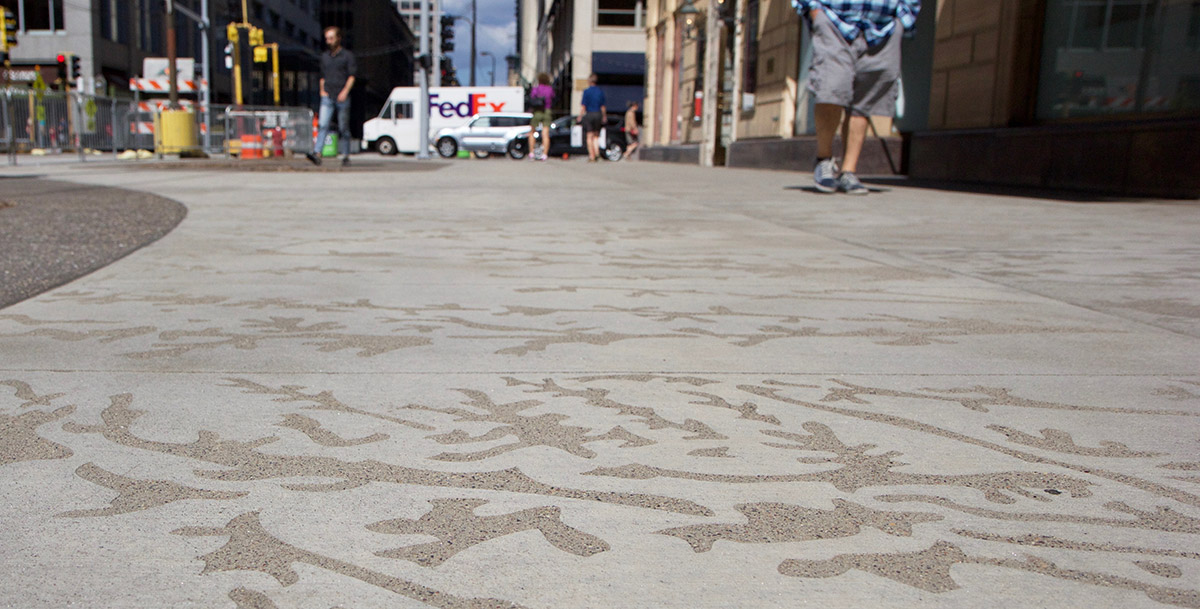 "Blasting in a busy pedestrian area down-town meant we needed an option that would reduce dust as much as possible while we were blasting. EcoQuip helped minimise the dust, allowing us to reduce the impact on pedestrians by requiring very little containment. Also, typical clean-up was greatly reduced."

Everything you need to know about blasting PPE for dry, wet and vapour abrasive blasting.