Since 1919, Main Motor Chevrolet in Anoka, Minnesota, has been selling cars and trucks while holding the same values: investing for the future by upgrading and expanding their facility. In October 2018 they decided they needed more control of their service fluids and installed Graco’s Pulse FC Fluid Control system.

The Main Motor Quick Lube service sees about 75 customers a day, while their main service brings in another 30–40. “Quickness and efficiency is our number one goal in the Quick Lube,” said Jaime C., Quick Lube manager at Main Motor. Before they installed Pulse FC, they were losing a significant amount of oil from over-pours and inaccurate meter readings. “With 17,000 customers, anytime you’re even losing half a quart of oil, that could add up relatively quickly,” said Jaime. “The Pulse FC system has been very beneficial to us.” In the Main Motor Quick Lube, each technician gets a fluid card, places the card on the card reader and then simply programs the type and amount of oil needed — which is the exact amount that will dispense. With Pulse FC, they have seen a significant drop in lost and unaccounted-for oil.

The Importance of Fluid Control

“Fluid control is very important in a shop like this,” said Joe P., service manager at Main Motor. With an average vehicle taking about 6 quarts of oil, Main Motor is dispensing about 180,000 quarts of oil a year. Joe added, “In the past, when I did not have the Pulse FC system, month after month we were seeing a $600 loss, an $800 loss; it wasn’t getting billed out like it should. If the technician didn’t get it charged out in the parts department and he just went and grabbed a quart of oil, that’s a loss. It’s not getting billed to General Motors or the customer.”

There was no accountability before. “Now the parts department bills out how many quarts of oil they need,” explained Joe. “They add the oil to the card, then the technician comes up to the parts counter, grabs his oil filter, grabs his oil card and its billed to the repair order.” He added, “Loss is gone. I don’t have a loss anymore; I’m having a gain.”

“I would 100% recommend the Pulse FC system,” said Jaime. “It has cut down on our loss, it has gained accountability for our technicians and the shop, and it’s just 100% a smooth system.” Joe summed up his experience with Graco by stating, “I have a lot of Graco products in my shop, and I buy Graco because it works.”

“In the past, when I did not have the Pulse FC system, month after month we were seeing a $600 loss, an $800 loss; it wasn’t getting billed out like it should. If the technician didn’t get it charged out in the parts department and he just went and grabbed a quart of oil, that’s a loss.” 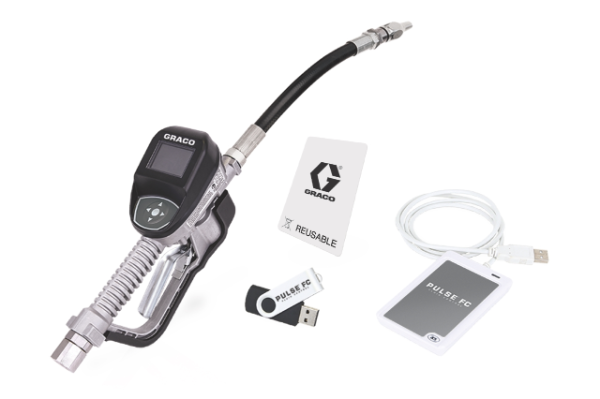 Take this quick quiz to find out what fluid inventory control or management system is right for you — and discover how it can greatly improve your operation’s productivity and efficiency.