The future of shipyard blasting for surface prep

Twenty-five miles south of the Canadian border, ferries pull into the Port of Bellingham, Washington, the southernmost terminus of the Alaska Marine Highway System. A stone’s throw away from the ferry terminal, the 800-foot pier of Fairhaven Shipyard juts into the bay.

Owned and operated by Puglia Engineering, Inc., Fairhaven Shipyard is a small-to-medium sized facility – as far as shipyards go – consisting of a semi-submersible dry dock barge, a dry dock, a marine railway and 5 cranes. Their main client is the U.S. government: they do full blast and paint for vessels serving the Alaskan and Washington state ferry systems, coast guard, navy and army. A smaller portion of their business comes from giving “a shave and a haircut” to commercial customers who can’t afford a full blast.

They do a tremendous amount of abrasive blasting at Fairhaven: at least ninety percent of the ships they service need surface preparation and paint. In the last ten months alone they blasted forty-nine vessels.

Up until 2012, when they wet blasted they used slurry blasting for the ship hulls, using water rings on sandblasting rigs, but the system was far from perfect.

“With slurry blasting you use a lot of water and produce a lot of grit,” says Benny Briones, paint lead for Puglia Engineering at Fairhaven. “You spend a lot of time washing, trying to get the surface clean. In the end, it’s a big muddy mess. “A big disadvantage with slurry blasting is that the blaster controls the water flow at the nozzle.

When the mud starts flying everywhere, the blaster will dial the water down for better visibility, but that defeats the purpose because you won’t get the dust suppression. Plus you have the weight of the garden hose at the nozzle which contributes to operator fatigue.

According to purchasing manager Joel Underwood, all the labour involved in containing and cleaning up the site was costing Puglia’s customers a lot of money. “We were trying to find something that would bring more customers into the yard and make it more efficient, so that they could afford a full blast.”

Searching for solutions on the internet, they stumbled onto wet abrasive blasting technology and decided to rent one. They could see the potential for their operations, but they were not yet convinced.

“The unit we rented had some problems,” says Benny. “There was not enough pressure. It was a single-tank unit with a small hopper, with a tank that was only rated for 80-90 PSI, and it could only run 100 feet of hose. It just wasn’t built heavy enough.”

So the search continued, until they found the website for Graco’s Geo-Blaster product line. “There we saw guys using it on the street, with no containment, with cars driving by. We are so watched here – it’s not uncommon to have OSHA come down – that to see it operating on a street in California was amazing.”

Joel put in a call, asked a lot of questions and got a lot of answers. They agreed to take two high-capacity, double-tank GB 1200s, with the understanding that if the machines didn’t live up to the hype, they would be returning them.

“Wade Hannon showed up at the yard with the machines and put the units together. He instructed us how to dial in the sand and water, and adjust the PSI. Right there, we fired it up under a 300 foot barge and tested it,” says Joel. “It did the job with less abrasive, less dust, less water and without creating a huge, swampy, gritty mud puddle.”

“With the vapour abrasive blaster, the water is controlled at the unit,” says Benny. “There’s no tank to fill up – it runs the water by hooking up a garden hose to the unit. And it’s easier to control the water and the mixture – everything is controlled by the pot tender.

“With slurry blasting, the operator needs full body armour. But with the vapour abrasive unit, you have someone at the pot, with the operator spot blasting on a manlift with just a face shield and respirator and no containment. Or we might throw up a tarp to shield a welder. But in a normal blast environment, you don’t get near the boat.”

“It’s is a completely revolutionary blast system,” said Joel. “We have cut our clean-up cost and time by 25-30% and we can have welders and other crafts working next to blasters in a completely safe environment.”

Were they getting a good return on their investment? 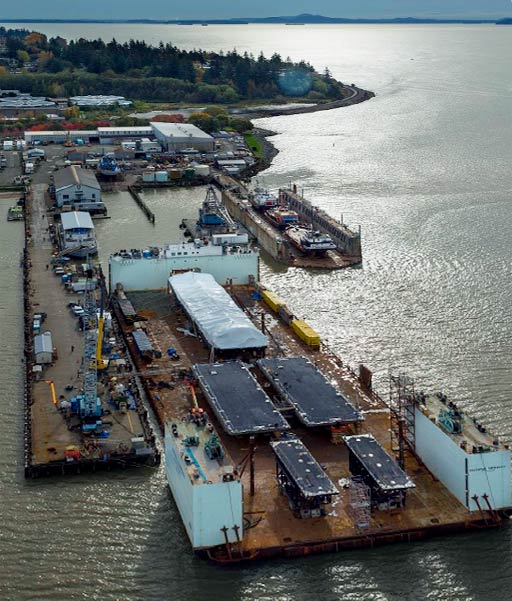 The shape and material of a nozzle affects blast pattern and speed, service life, and job size.