What’s a PLC and why should I care? This video explains what a Programmable Logic Controller is and how it can help you save money.

What is a PLC?

Ever heard of something called a PLC, but wonder what it is and does?

Like some people’s brains, a PLC can multi-task – and it's lightening fast.

What Does a PLC Do in Industrial Finishing Terms?

Think of a PLC like a brain controlling a finger on the trigger of a paint spray gun or applicator.

While the brain controls the finger on the trigger, it’s also controlling the eyes. The eyes would be like a scanner reading a barcode in a PLC controlled system – think of the scanners you’ve seen at your local grocery store.

Like a scanner, the eyes read and signal something to the brain – in this case that the dispense is complete - and then again, instantly signaling back from the brain to the finger to stop pulling the trigger.

A PLC can control many inputs and outputs. For example, it can direct a paint line to change color, so that all the widgets being painted go from red to black.

How Does a PLC Communicate?

A Programmable Logic Controller (PLC) can both talk and listen via a communication protocol or discrete I/Os.

"I/O" stands for inputs and outputs.

Think of these ways of communicating as languages or sets of rules that define these languages.

The discrete I/Os include both digital and analog signals. A discrete system uses a digital signal to communicate.

The easiest way to think about this is the signal used in a simple light switch.

Analog is more like a dial with a range values, instead of on or off; and it has to be converted to digital or digitized.

Say there was an amplifier with a range that went from 1 to 11, hooked up to an electric guitar.

Unlike digital with its on-or-off only, the amplifier can be turned to control the volume in a range.

In fact, that’s how a Graco electric circulation pump works – with a dial to control its speed over a range.

How Can a PLC Control a Factory Paint Kitchen and Spray Booth?

Building on our color change story, this example has a proportioner, pumps, gun, scanner and robot. The Programmable Logic Controller or PLC or "brain" monitors the entire system, telling the components to go on and off in the correct order and for the correct amount of time.

Why use PLC Control?

A PLC can control all kinds of systems and components in that system, all at the same time. Not to mention the fact that they are extremely accurate, fast and can consistently repeat a process, over and over.

Contrast this level of control with an individual painter. While there are advantages and disadvantages to both, even the most highly skilled likely can’t keep up the level of accuracy of the PLC-controlled system.

Plus, the PLC isn’t going to make adjustments to the system on its own. For example, it won't turn up the flow on the sprayer without asking.

What can this level of automation do for your paint line?

The kind of control we’re talking about can give you the precision you need to save material, and lessen rework. 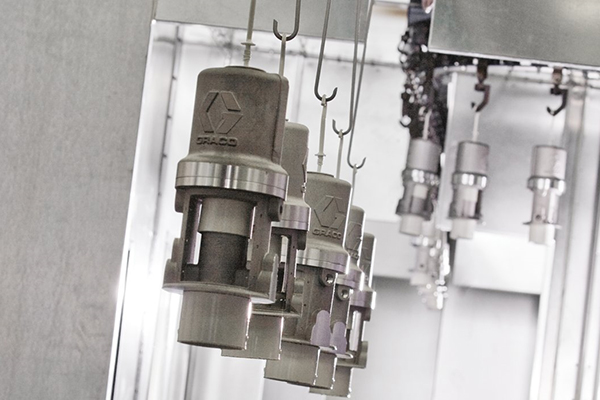 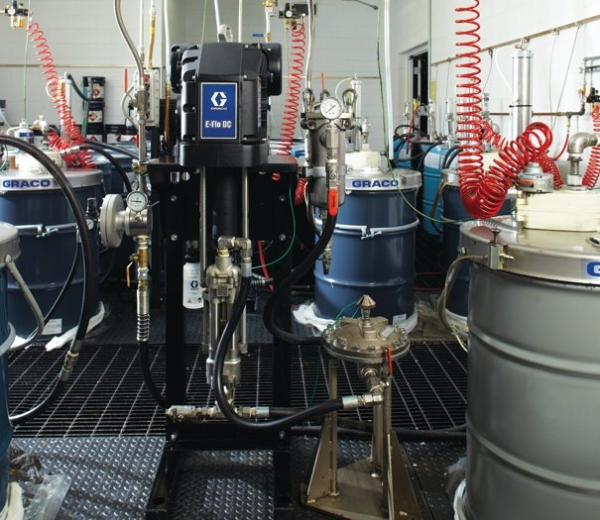 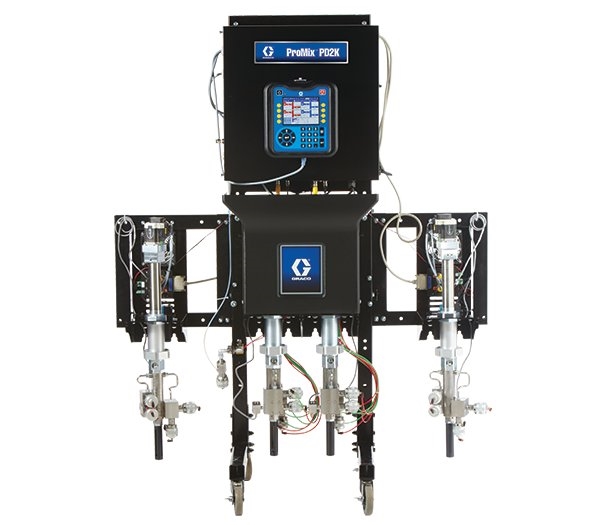 Why Move to Intelligent Solutions

Manufacturers need intelligent solutions in their paint mix rooms that can reduce things like unexpected downtime, while decreasing energy costs